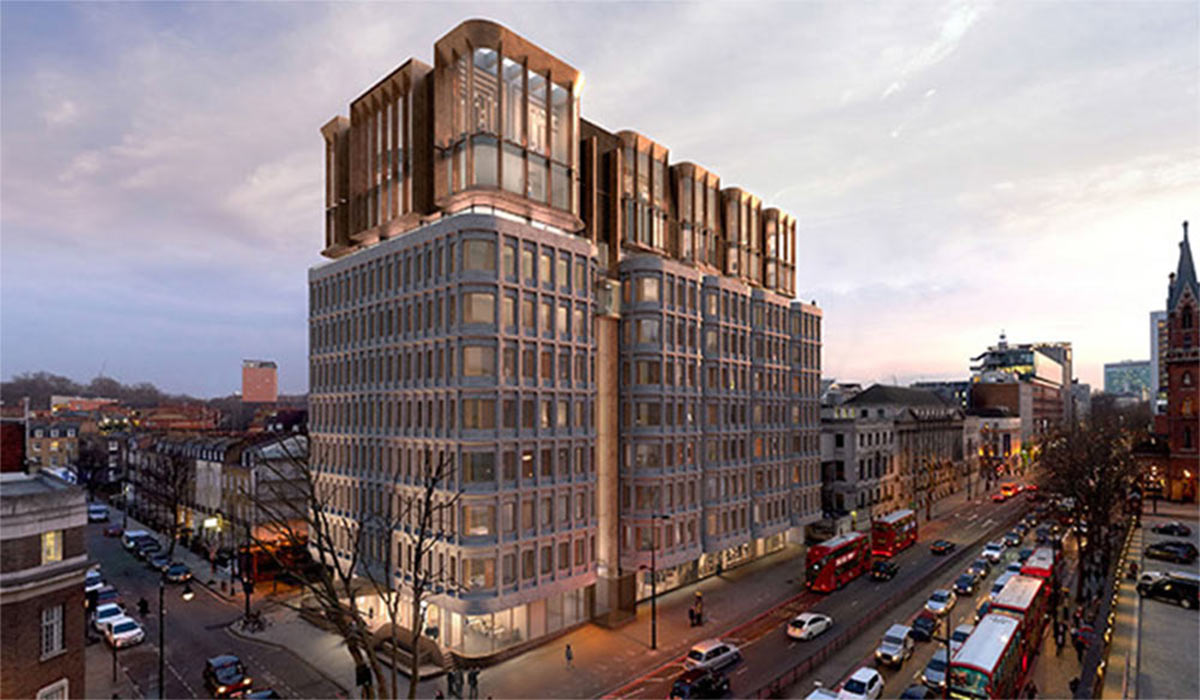 When Camden Council set about extending its old Town Hall in the early 1970s, its plans for a modernist structure went down like a concrete balloon. The eight-storey Brutalist block would adjoin the borough’s existing building, with its handsome porticos of Portland stone, via a second-floor walkway. It would sit opposite Sir George Gilbert Scott’s neo-gothic behemoth, the Midland Grand, now the St Pancras Renaissance hotel.

Before construction had even started, a council workers’ union nicknamed the Town Hall Annexe “Nelly the white elephant”. Its open-plan offices — radical for the day — were as unpopular as the exterior, which loomed over the fume-choked and then insalubrious Euston Road. Staff threatened never to set foot in the building when it was finished in 1977, until the council threatened them in turn with the sack.

Nelly limped into position, later hosting a ground-floor library. But her marble-specked concrete façade would become stained by pollution and a popular aversion to Brutalist design. When the cash-strapped council put the building up for sale in 2015, developers jostled for a prime site in the now gentrifying King’s Cross. All except one proposed to demolish the building and start again.

“It really does feel like our DNA runs all the way through this,” says Bruce Robertson on the roof of the building. It’s a sunny spring morning and Robertson is overseeing the annexe’s rebirth as The Standard, the American hotel brand’s first foreign outpost, which is due to open next month. The precast concrete panels have been blasted back to their original sparkle and the umbilical bridge to the old town hall has been cut. A steel-and-glass roof extension towers above us like a new crown on a made-over prince.

The refurbishment comes at a time of mixed fortunes for Brutalism. The postwar movement used modern techniques and concrete to reimagine offices, public buildings and housing. Camden became a crucible for civic architecture as in-house designers such as Neave Brown masterminded projects including the Alexandra Road Estate. That now-listed housing development was finished around the same time that Brown’s department completed the Town Hall annexe.

The buildings, which were always polarising, have regained a new cool this century. But for every Brutalist structure with protected status and a place on screen-printed tote bags — see also the Barbican and Preston Bus Station — others are turning to dust. Right now, the tessellated concrete triangles of Welbeck Street car park, off Oxford Street in central London, are being demolished after its sale to a hotel company. The Twentieth Century Society, which campaigns to protect post-1914 architecture, promoted an alternative hotel design that would have preserved the original façade. “The Standard project shows what can be done,” the society’s director Catherine Croft tells me.

Robertson, a garrulous Glaswegian in blue-rimmed spectacles, joined the Standard as general manager in 2015 after a stint in charge of Shoreditch House. Before he moved, he had heard about the plans drawn up by the hotel and Crosstree, a London-based developer that bought the site for £60m. He had never noticed the building, which is a short walk from his flat in the Barbican, so went to check it out. “I remember I looked up at it with my girlfriend, got shat on by a pigeon, and thought, ‘this looks like a Standard’,” he recalls. “The very next day André phoned me and said, ‘Do you want to get involved?’ ”

The Standard set out its stall in 1998 when André Balazs, the owner of the landmark Mercer Hotel in New York and Chateau Marmont in LA, reimagined a 1960s retirement home on Hollywood’s Sunset Strip. The Boston-born entrepreneur and developer would thrust a wry hipness into the still emerging boutique market, sold with a hefty side salad of celebrity (investors in the first hotel included Leonardo DiCaprio and Cameron Diaz). Later outposts drew a creative crowd to a modernist 1950s oil company HQ in LA, to Miami Beach and to Manhattan, where two Standards include a new Corbusier-style block of concrete and green glass straddling the High Line.

The search for a London address came after Balazs first opened Chiltern Firehouse in 2013. The Victorian fire station became the capital’s hottest A-list hangout. But it was Balazs’ parting with his Standard brand that sparked its global assault. In 2017, the Thai developer Sansiri invested $58m and Balazs checked out (reportedly on good terms). After London, the Standard is opening a resort in the Maldives. Fifteen new locations due to open in the next five years also include Paris, Milan and Lisbon.

Robertson joins me on the roof with John McRae, a director at Orms, a Shoreditch-based architecture firm. We are wearing hard hats and work boots as a hi-viz army races below us to finish the project. It was McRae’s job to turn an unloved office block into a destination hotel. He worked alongside The Standard’s interior design team of Shawn Hausman, a longtime Balazs collaborator, and London-based David Archer, who did Chiltern Firehouse.

Robertson and McRae show me a couple of complete rooms, where a vaguely mid-century aesthetic swerves the clichés into which so many generically hip developments fall. They have boxed up the open-plan floors to create 266 rooms, from about £240 a night to over £1,000 for the glass corner suites at the top. Terrazzo-effect carpets in bright blues have rounded corners to pick up on the windows. Original “waffle slab” concrete ceilings, made up of chambers, have been exposed and painted white, while custom, built-in couches below the windows suggest a sort of retrofuturist ferry.

On the ground floor, a tiled feature wall gleams behind a dark-wood reception desk. Isla, the restaurant, is still under construction when I visit but more tiles and dark wood cover Double Standard, the hotel’s bar. (The Standard perhaps missed an opportunity here to call it “The White Elephant”, the nickname council workers gave to the bar they negotiated for the original building’s top floor). A second restaurant is due to open on the roof later this year.

The waffle slab ceilings gave the team one of its biggest headaches. On the old blueprints, they were regular, but when the walls went up, they didn’t always line up neatly with the waffle holes. Nothing could be done — messing with solid concrete is expensive and time-consuming — but it was this integrity that had appealed to The Standard in the first place. It also partly explains the resurgent appeal of Brutalism; elegant symmetrical patterns introduced into immovable concrete façades and silhouettes cry out to be Instagrammed.

Brutalism sells. Catherine Croft tells me about a new chess set. I look it up. It costs £395 and is made up of hand-cast resin models of modernist London landmarks. The Queen is Centre Point, the former office building now refurbished as luxury apartments. The King is Cromwell Tower in the Barbican, where flats sell for millions. The rooks are One Kemble Street in Covent Garden, a drum-shaped sister to Centre Point that Archer tells me The Standard eyed up before it settled on the smaller King’s Cross site. The pawns are sections of the Alexandra Road Estate.

“You still get ageing commentators who call it failed architecture,” says Christopher Beanland, author of Concrete Concept: Brutalist Buildings around the World (Frances Lincoln). “But when I do book talks the room’s full of young enthusiastic people. If you’re looking at the bottom line as a hotelier, you want them to be your customers.”

The move is not confined to London. In Stockholm, At Six opened in 2017 in a derelict low-rise block, and there are tentative plans to turn the Pirelli Tire Building in Connecticut into a “brutique” hotel. The block, designed by Marcel Breuer, now sits incongruously as part of an Ikea site. Purpose-built Brutalist hotels are also now being refurbished, meanwhile. Totem, a mid-century hotel in the French ski resort of Flaine (another Breuer project) reopened in December 2015 and now revels in its concrete identity.

The Standard was also drawn to an area now swarming with the same 20 and 30-somethings who are rediscovering Brutalism. As Camden’s old annexe collected grime, King’s Cross became a byword for 1980s urban decline. The refurbishment of the Midland Grand and King’s Cross Station have signalled a 21st-century revival. The Eurostar arrived in 2007. Shiny developments and converted warehouses have drawn new life to the banks of the Regent’s Canal. Google, LVMH and Universal Music have moved in, along with the Central Saint Martins fashion school.

Not that all residents approve of Nelly’s second life. The former hedge fund manager Lord Fink lives opposite in a penthouse — reportedly bought for £10m in 2009 — carved out of the old Midland Grand. In a letter to Camden’s planners in 2015, he called the annexe “one of the ugliest buildings around St Pancras”, adding: “I was not too upset to hear it may be demolished.”

Fink also questioned the development’s value to the community. Robertson and McRae are aware of the pitfalls in their mission to turn a civic building — a Camden building no less — into a hip hotel. They hope to honour that heritage, too. “Hotel brands never used to talk politics but people are too smart for that now,” Robertson says. “We’re really busy as a platform for activism.” At the American Standards, “Ring Your Rep” phone booths have a direct line to Congress and the company has hosted gun control campaigns. The London branch has yet to schedule its own events.

Back on the roof of the old annexe, Robertson shows me the outdoor bathtubs that will serve the top suites in the extension — a place to recline after a long day’s activism, perhaps. We look over the road towards Fink’s penthouse. He doesn’t reply to my emails asking what he thinks of the annexe now it is done, or whether he plans to pop into the Double Standard for a cocktail. If he does, he may not find a spare stool.