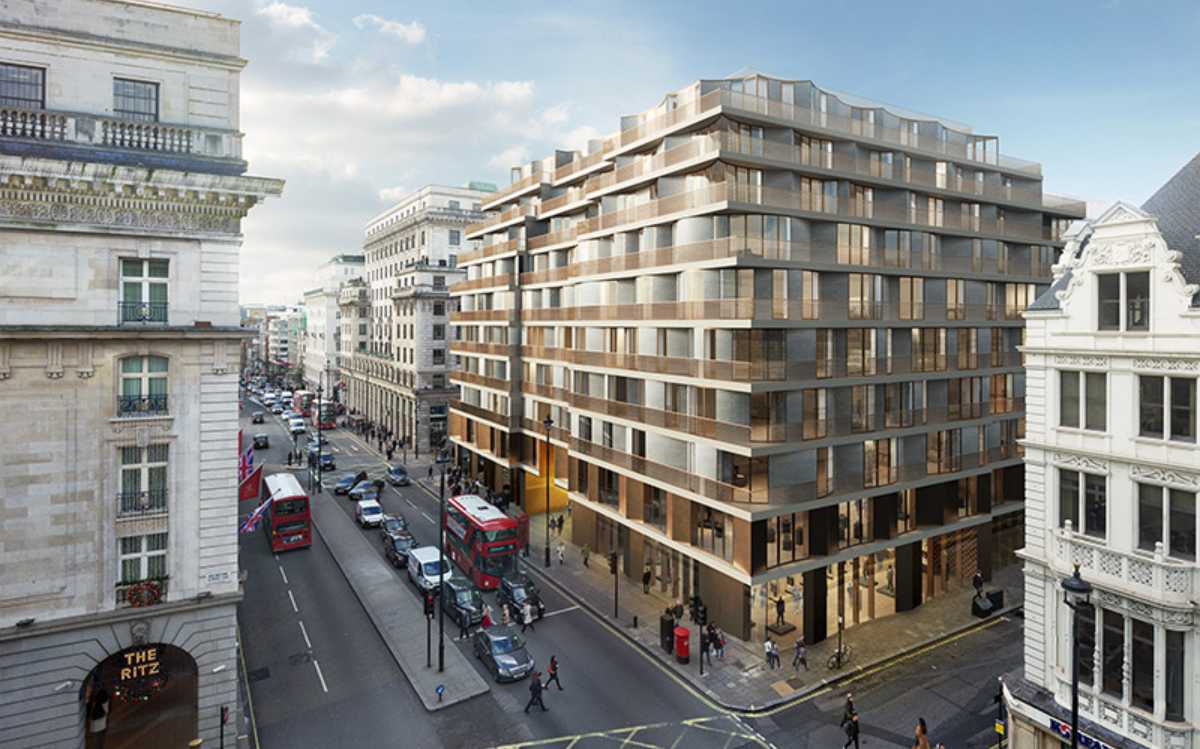 Planning permission has been granted for a luxury mixed-use development designed by British architect David Adjaye for a site opposite London’s iconic Ritz hotel.

Adjaye’s studio – which is also working on a 100-bed paediatric cancer centre in Rwanda and a museum in New York City that aims to promote work by artists of African descent – unveiled the design in March this year after being awarded the project ahead of rivals including OMA, Jean Nouvel, Frank Gehry and Eric Parry.

The 10-storey building will incorporate retail units at street level, with a hotel occupying parts of the ground and first floors. The upper floors are designated for residential use and the development also incorporates Dover Yard – a pedestrianised thoroughfare that will be redeveloped to create a landscaped public plaza.

Images show concrete floorplates that separate bands of fluted walls along the facades, incorporating stone cladding and glazing. A circular void rising through the centre of the main building is intended to bring natural light to the surrounding spaces.

A statement announcing the news explained that the design was influenced by the street’s existing architecture and was developed alongside stakeholders including English Heritage and local residents’ groups.

“Requiring a contextually sympathetic design, the concept draws on the shapes, forms and textures of the neighbouring historic buildings,” said the architects, adding that the fluted columns and bay windows of neighbouring buildings influenced the facade’s three-dimensional expression.

“The treatment plays with the traditional sculpted silhouette of binary planes that curve, straighten and invert in a rhythmic sequence – reinterpreting and rearranging the traditional sequence to create a shifting plane of scalloped edges.”

The building’s proportions and roofline also echo those of existing buildings on the street, including the Royal Academy and Burlington Arcade. Referencing the classical arrangement of these iconic buildings, the facades of the new development are separated into three distinct sections with a central focal point.

“Adopting a classical tripartite symmetry, each elevation offers a dominant central element, with smaller volumes on either side,” the architects pointed out.

Materials specified for the exterior pick up on the street’s existing palette, with Portland stone applied to the bays and the balustrades, and screens picked out in bronze.

“Elizabethan designs have offered inspiration for the patterns, which are etched into the stone and referenced via the mesh-like grid of the bronze screens, giving the facade an intricate texture and a sense of movement as the light catches these shapes and outlines.”

The development will be one of a Adjaye’s largest built projects in the UK, where the architect is also renovating a house in London to create a home for two artists and has designed a memorial to extinct species perched on the edge of an island cliff.